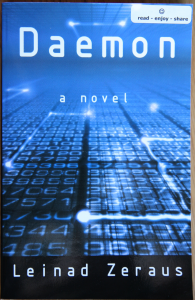 This is a story of a smart way to build international marketing buzz and prolong the sales life of things like books.

In the summer of 2008 I attended a session with Jyri Engeström, (the founder of the Jaiku microblog) at the internet conference Reboot in Copenhagen. During his speech Jyri asked the audience how many had read the new internet science fiction book Daemon. Nobody raised their hands, which was very surprising to Jyri. So I realized that I had missed something important and immediately ordered the book from Amazon. A few days later I received the book and wrote about it on Jaiku.

I was surprised when I soon thereafter received the email below from the marketing director of the Daemon book publisher Verdugo Press in California. She had picked up my post on internet and despite that it is written in Swedish understood that I was reading Daemon:

My name is Michelle Sites. I am the Marketing Director for Verdugo Press, a small publisher here in Los Angeles. I wanted to take a moment to thank you and Jyri for mentioning Daemon by Leinad Zeraus on Jaiku some time ago.
…
Naturally, we’d love to increase Daemon’s global visibility. Henrik, if you’d like to receive a few complimentary copies to share with peers, just send me a mailing address.
Kind Regards,
Michelle Sites
Verdugo Press, VP & Marketing Director

She understood that I am a networker and wanted me to become an ambassador for the book in Sweden.

So I just received a package with 10 books and this lovely note:

The books all had stickers: “Read – Enjoy – Share”, so of course I immediately spread them around in my networks, telling everyone this story.

This is an excellent example of how to use social media for modern, cost-efficient marketing and branding!

Updated info from Verdugo Press:
“The blue cover is the original edition published by Verdugo Press (a small independent publisher) in 2006. This was a print on demand title.Â  Which means it was only sold online.Â  Despite that limitation, Daemon continued to gain in popularity (via word of mouth) and had developed quite a cult fan base.

By early 2008 many large mainstream publishers offered to acquire the rights to Daemon and its sequel.Â  In 2008 Dutton (an imprint of Penguin) acquired world rights to Daemon. As of now, Daemon will be translated in six languages.

.
Finally, Daniel is also in the final stages of negotiations to option the book with a huge Hollywood producer/studio. I will release more info once it’s official. For a little more background visit the May 2008 Wired article: How the Self-Published Debut Daemon Earned Serious Geek Cred”

From the Wired article:
“The fast-paced technothriller tells the story of a terminally ill game designer who unleashes a diabolical, self-replicating Web entity that enlists disaffected Netizens in its mission to destroy civilization.”

6 thoughts on “How to create marketing ambassadors online”