The world as we know it is in turmoil financially. Everybody is lying low and avoiding all expenses, which further increases the crisis. I have given up on trying to understand the underlying mechanism of this, realizing that it is not logical but based on group psychology. I just have to suffer it through, right?

I have been hit with this before:

In 1994 the Swedish Krona was under attack and the Swedish central bank tried in vain to protect it by raising the interest rate to 500%. Back then I had large loans on my flat, so it was quite though.

In 2000 I lived in Los Angeles, building an internet ineractive elearning portal on parenting, how to raise kids using modern psychology. This was at the apex of the internet hype curve so we of course tried to raise venture capital. Unfortunately, being Swedish,Â  we were a bit too serious and worked hard for a long time to produce excellent scripts, marketing plans, business models etc.
It was all ready to be presented in a state-of-the-art form the week after NASDAQ took a nose dive in April 2000…
Suddenly everything with .com at the end was poison to everybody. But I learned many very useful things and had lots of fun, so I chose to not regret anything and go forward.

I then moved back to Stockholm and was asked to start a research lab at the Interactive Institute, focussing on elearning methods and interfaces. The lab was financed by corporate sponsors like Ericsson. Well, 6 months after our bold start the financial crisis hit Sweden and all sponsors suddenly evaporated so I had to lay off the staff I had just hired and put the projects on idle. Being a very result-oriented person I quickly left to discover that it took 2 years before companies wanted to hire consultants at all. But in that time I developed a number of business ideas, increased my network and learned many new things.

So this time, instead of hiding under a rock like everybody else I prefer to see this crisis as an opportunity! 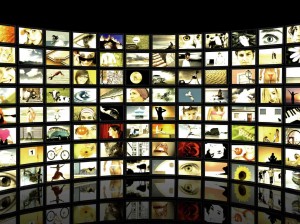 I am now focussing on all the new exciting possibilities with online video:
Never before has the gap been greater between the available technology and our much lower ability and creativity to make business use of it!

When I started my first interactive media company, Ahead Multimedia in 1988 I first had to educate the customers on what interactive media was, then persuade them to buy both our services and all the Mac computers and other hardware that they needed. Now everybody has powerful computers and wireless broadband, but mostly using it only to write reports in Word…

So it has never been easier and cheaper to develop and try out new digital business models, so lets use this crisis to exploit this!

There are others thinking along the same lines:
Why to Start a Startup in a Bad Economy: well written by Paul Graham, an American investor/entrepreneur.

I am writing this post together with a bunch of blog friends during a “Blog Saturday”: 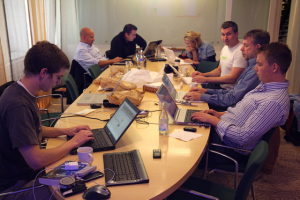 If you are into our old Viking language, donÂ´t miss to check out their views on the recession: (from the left)

10 thoughts on “Recession: threat or opportunity?”