The TED Open Translation Project is using volunteer translators  to translate the 400+ TED Talks into more than 40 languages. TED worked for a year on this project, extending the dotSUB translation technology.

“TED’s mission is to spread good thinking globally, and so it’s high time we began reaching out to the 4.5 billion people on the planet who don’t speak English,” says TED Curator Chris Anderson.

-We’re excited to be using a bottom-up, open-source approach that will in time allow all our talks to be translated into all the world’s languages.”

It is estimated that it would have cost $13 million to translate all the 400+ TED Talks into 40 languages the traditional way. But cost-efficiency is not the only advantage of this kind of crowdsourcing. TED’s growing worldvide army of volunteer translators each get a photo credit page, a very clever way of creating local ambassadors that also help spread the whole TED concept. This of course only works for talks that are fascinating to a wide audience. But commercial project could use the same concept to pay the translators, still very cost-efficient and scalable. 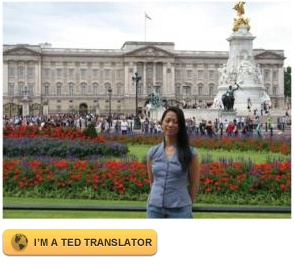 Here is Emma Gon from China, she has so far translated seven TED Talks into Spanish!

From the TED blog: To ensure quality translations, TED established a set of guidelines and systems to help translators deliver the best work possible. To begin with, a professionally generated (and speaker-approved) English transcript is provided for each talk, so that all translations are based on the same source document. TED then requires every translation to be reviewed by a second
fluent speaker before it’s published; both translator and reviewer are credited by name on the site.

I am very impressed by the user interface that TED has developed. Very advanced functionality and extremely easy to use!

Here is Hans Rosling’s speech about HIV. I have selected subtitles in Swedish and the interactive transcript also in Swedish. I can quickly read through the transcript and click on any word to make the video instantly jump to this part. This also means that I can have the subtitles in one language and the transcript in another language, perfect for learning languages!

I have previously applauded similar user interfaces with clickable transcripts from MSNBC and New York Times, but here TED is taking it one step further with the multilingual functionality.

So clever. So easy to use. So cost-efficient. A milestone in multilingual online video!

2 thoughts on “TED translations – A milestone in multilingual online video”