Singularity University is a global learning and innovation community using exponential technologies to tackle the world’s biggest challenges and build an abundant future for all. It was founded by Ray Kurzweil and Peter Diamandis

3. significantly improve sound and camera quality in our hardware;

5. translate over 100 languages in Google Translate;

6. caption over a billion videos in 10 languages on YouTube;

7. improve the efficiency of our data centers;

VR har många tillämpningar inom medicin och sjukvård, men kan även användas för att stärka empati. See this story from a refugee camp and you cannot avoid feeling empathy: How virtual reality can create the ultimate empathy machine When you are sitting there with her in her room, you are sitting on the same ground that she is sitting on. Because of that you feel her humanity in a deeper way, you empathize with her in a deeper way. VR is a machine that makes us more human.

ViaCyte är en startup som arbetar med en potentiellt revolutionerande product inom diabetes. “A product that can free patients with type 1 and type 2 diabetes from long-term insulin dependence. If successful, ViaCyte’s products will relieve patients of both the acute challenges and risks, as well as the long-term complications, associated with diabetes.”

What factors make people reluctant to use cloud-based medical imaging?

“The main concerns are around taking patient data to the cloud. However, we created a software that strips patient data from the images we send, and only users with the right credentials can reunite them. Our cloud never sees or stores any confidential patient information.”

We live in a new world with an old operating system.

Time is our most important currency.

We unlearn our creativity skills in our schools.

70% of all birds on Earth are chickens.

We need to decouple our food from the environment

Bravery comes for free if you’re passionated about the subject.

I have just attended my third LeWeb internet conference in Paris, my two previous were in 2007 and 2008. I was lured back to LeWeb due to their theme for this year: “Internet of Things”, a rapidly growing sector that I think will affect our society and businesses just as much as the current Internet has done so far, and where I see many new business development possibilities.

I am somewhat overwhelmed with impressions from my three intense days here, so this will only be some tidbits of what I found interesting and some feedback on the conference format.

My overall impression of LeWeb is that it has grown into one of the world’s biggest and most professionally organized internet conferences. There were a very mixed crowd from all over the globe attending and the topics of the talks was very varied as they should be, I was pleasantly surprised by some unexpected speakers.

Talks that inspired me at LeWeb 2012

Here is Sen.se Rafi Halidjian founder,  he was the guy behind the innovative and funny wifi-connected rabbit Nabaztag (mine is still in my bookshelf, though sadly dead)
His announced his original vision:
Step 1: Connect rabbits
Step 2: Connect everything else!
Enjoy his visionary talk, he is creating a very interesting platform for Internet of Things.

James Park, founder of Fitbit (I like mine!)  talked about how hard it is to develop hardware “There is a reason it is called hard-ware” Check out his talk here

Anthropologist Amber Case gave a very good talk  about cyborgs and uses for real-time location tracking and Quantified Self. I totally agree with her about the Tower of Babel interoperating problem with Internet of Things. (Note the very professional video mixing between her and the audience, illustrating her story very well!)

I was surprised to find myself crying at LeWeb, with salty tears flowing all over my face. This happened when by serendipity I was experiencing the talk by Scott Harrison, Founder & CEO of charity:water
First I thought: “this is a really good speaker with an amazing life story, but what has clean water shortage in Africa have to do with the Internet of Things?”
Then I became totally absorbed in his storytelling and the way he transformed charity work with state-of-the-art social media tools. And they are using GPS-equipped well-drilling trucks that tweet their donors when they are drilling water wells i Africa!
And then he showed the video about Rachel and my tears started flowing. So I urge you to watch his talk

If you don’t have the 45 minutes to do that, see only the 5-minute video about Rachel a 9-year old with a borthday pledge. If you don’t cry when seeing this video, your heart is made of stone!

Another surprise was Neelie Kroes, Vice President of the European Commission and responsible for the Digital Agenda. She is 71 years old and seems to be more sharp and updated about everything Internet and politics than most people. I was impressed by her wisdom and ability to give clear answers. My faith in the EU somewhat restored!

Overall there were many smart women on the stage, for example the TechCrunch editor Alexia Tsotsis was a very skilled interviewer and the chairwoman Chris Chipley of the startup jury impressed me.

Brian Solis, pricinpal at the Altimeter Group, check out his talk

Sigfox introduced a new type of global wireless network for Internet of Things: low power, long range (tens of km!) and low cost. Will be very interesting to see how this develops.

DoorBot from the company Edison Junior, one of many mobile controlled door bells, but this one is beautifylly designed and can be bundled with equally cool Lockitron remote-control for any doorlock, also presented at LeWeb

Reallocate.org,  a nonprofit that gathers developers to improve the quality of life for people with needs, great inititative!
The winner of the LeWeb startup competition was  QunB, a German company with an advanced tool for visualizing and analyzing data, their tag line: Broadcast your data! 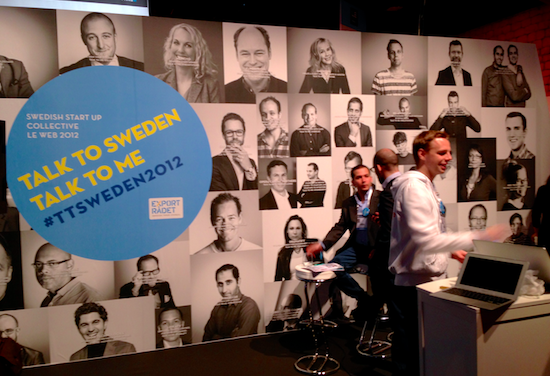 The Swedish Trade Council organized a booth for Swedish startups, it was a great success with lots of visitors and media from all over the world interviewing.

Kudos also to LeWeb for the super-professional video and audio on all the stages. I have never seen any better video projection, and the music video jingles and intros were state-of-the-art too, as you can see in the LeWeb videos below. 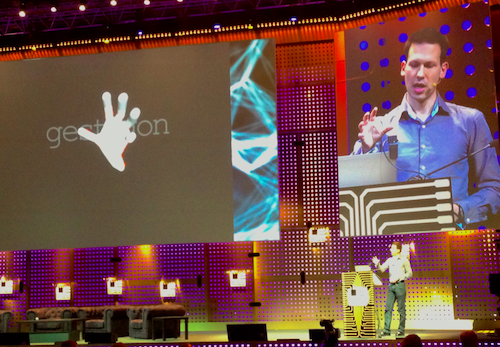 This picture does not show the splendor of the stage and video screens, but you get a hint. Here is Gestigon presenting their cool gesture-interpreting middle-ware platform.

When you listen to all these inspiring talks and meet lots of high-intense people you need fuel for the brain. LeWeb served the best of conference foods and drinks, here is a small taste of the abundance we enjoyed: 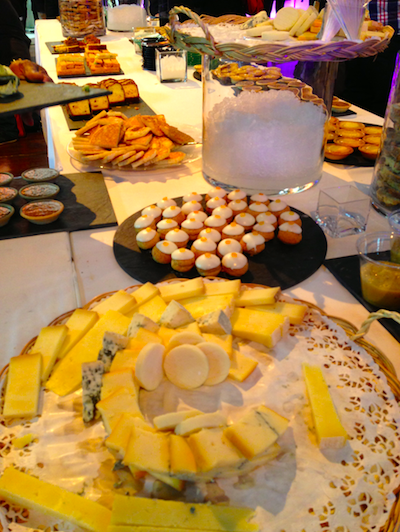 French food at its best. Conference organizers of the world, learn from LeWeb!

Things that LeWeb can improve

As is too often the case with trade conferences, there were too many talks that were just sales pitches. This should be banned, each talk must give something of value to the audience that they cannot find on the speaker’s corporate web site.

Also I feel that Loic Le Meur is a charming and energetic host, but he is doing too much back slapping of his friends on the stage and too many “Oh, that is awesome!” to everything being presented, even the quirky stuff. It would be more interesting with a more journalistic style, where the moderator asks also a bit tougher questions.

I also think there was a little too much focus on American speakers, it seems that we Europeans are mesmerized by all Americans that are famous, forgetting that we do have our own stars in Europe and also the main part of our business usually comes from European customers.

The mingling and networking is always very important at events like this, but there were way to few tables and chairs for this at LeWeb.

The LeWeb website is inexplicably lacking most of the basic stuff an event web site must have, such as: search, descriptions of the speakers and their talks, a list of the exhibitors with descriptions of what they are showing, the videos from the talks etc. It doesn’t even have a proper map of the venue and the exhibitions, where it is located in Paris, and you cannot search for it in Google maps since the street address given is not searchable.

I recommend LeWeb to give their web site a complete overhaul and start using a suitable online networking tool that facilitates networking among the participants before, during and after the event. LeWeb is using a tool called Presdo Match, which I found totally inadequate. I stumbled on a much better tool at LeWeb, the Danish startup Conferize that looks promising.

So based on all this I have updated my post about “Conferences Do’s and Don’ts with my findings from LeWeb.
Check it out if you are interested in how to organize state-of-the-art conferences.

I love attending conferences and seminars for the inspiration it gives me to listen to interesting talks and meet other curious people of all kinds. But I am usually also frustrated that the formats and the way conferences are organized is not evolving more, I see so many ways that conferences could bring much more value to attendees, organizers and sponsors.

So I have been accumulating a lot of analysis and ideas on how to organise conferences and gathered a part of it in my post “Conferences Do’s and Don’ts“.

I have now updated and revised this post based on my latest experiences.
It is soon getting too long for a blog post, maybe I should write a book?

So please enjoy my new edition of  “Conferences Do’s and Don’ts“, all comments are welcome!