I have organized many TEDxStockholm events and helped other TED organizers, translated TEDTalks and been active in the TED community since 2006. Now I have also managed to attend TEDGlobal and it certainly met my highest expectations!

It’s been a month since I returned from Edinburgh, exhausted but overloaded with inspiration. Ever since I came back I have been very busy with work projects, so it is not until now, a month later that I have been able to try to distill this very intense experience. I realize the futility in trying to write a complete story of all my experiences during my week at TEDGlobal, so here follows some tidbits and personal tips that I hope will inspire many more to attend TEDGlobal some time.

800 people from 66 nations. Ages 20-75, around 60% men. There were students and many academics, lots of professors, CEOs, entrepreneurs, NGO leaders, venture capitalists, artists, writers… the list goes on. Most are dressed casually, nice to see such variety in clothing from different cultures. So what do we all have in common? Curiosity! Everyone is open-minded and curios to meet others and learn from them. I am a chronic networker, but I have never attended an event where everybody else was so easy to get a conversation started with. And everybody had an interesting story to tell.

I was surprised to see so many Americans, I thought they attended TED in Long Beach, but they said that they wanted the more international TEDGlobal.  My observations: One category missing were politicians. Why don’t they see the  value of TED for inspiration and exchange of global ideas on the big issues?
And why so few participants from the Nordics? I met just five Swedes, one Norwegian and one guy from  Finland. Are we too complacent?

TED has set a new, much higher standard in the conference business, the quality of the speakers and their talks, the moderators, the venue and the audio-visual technology, everything was state-of-the-arts.

I really like the way it is organized down to the smallest details:

TED is still the only conference organizer that knows how to do a proper name badge that encourages networking: 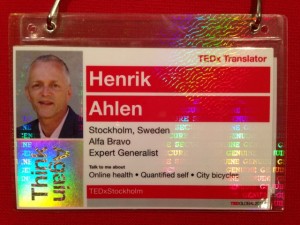 At TED, titles tend to be more creative. My title, Expert Generalist was a hit, starting many conversations. In Sweden, some people react negatively to it, falsely assuming I claim to know everything about everything. At TED, 100% reacted positively and wanted to hear my own description of what it means.

I saw almost all talks and enjoyed most of them. The speakers are very professionally coached by Chris Anderson and Bruno Giussani (the TEDGlobal curator), first via Skype, then on-site prior to the conference. I was invited to attend one of their speaker coaching sessions and was impressed by the feedback that they gave the speakers.

Here are some of favourite talks, click the links for descriptions and videos.

George Monbiot For more wonder, rewild the world
“Monbiot’s gives a classic example: In 1995, wolves were reintroduced into Yellowstone National Park, 70 years after they had been exterminated. Wolves take life, but they also giveth. An unfathomable cascade followed: Deer populations went down, so streamsides and riversides flourished again; trees on the riverbanks quadrupled in height in just six years; bare valleys reverted to aspen and willow; birds and beavers alike flourished; beavers’ dams created habitats for otters, muskrats, fish, frogs and reptiles; and on and on.”

Raffaella d’Andrea: The Astounding athletic power of quadcopters
Demo of flying quadcopters: robots that think like athletes, solving physical problems with algorithms that help them learn.

Russel Foster: The neuroscience of sleep
Why do we sleep? Here is interesting myth-busting.

Kelly McGonical: The Upside of Stress
Stress might not be all harmful.

Chrystia Freeland: The age of global plutocracy
The most important economic fact of our time, says Chrystia Freeland, author of Plutocrats, is that we are living in an age of surging income inequality, a global phenomenon that includes the US and UK, certainly, but also Communist China, India, and, she says, “we’re even seeing it cozy social democracies like Sweden, Finland and Germany.”

Marla Spivak: The Big Bee Summer (the picture at the top)
1/3 of our crops depend on bees. So let us all plant bee friendly flowers!

Eric Li: A tale of two political systems
Controversial, some people in the audience was offended by what they perceived as communist propaganda. Others,like me, did not think it was propaganda since Eric said “This only works in China” and found his talk enlightening and inspiring. Also read his NY Times op-ed “Why China’s political model is Superior” (Eric said that the headline was set by the NY Times, he did not stand by it.)

Joseph Kim: From hunger to hope
Everybody in the audience, including me, wept during this talk. A very tragic tale with lots of courage and willpower.

Abha Dewasar: The dangers of the digital now
The impact of technology on the elf and our perception of our own personal narratives.

David Steindl-Rast: Want to be happy? Be grateful
Here is a monk with an warm message that has already changed my life: “It is not happiness that makes us grateful, but gratefulness that makes us happy.” See his short video about gratitude.

In a separate venue attendees are given the chance to give very short talks, curated and hosted by TED organizers June Cohen and Kelly Stoetzel. All kinds of subjects inspired us, for example my friend Dick Lundgren talked about his bike renovation project. I really enjoyed these talks, a great complement to the main stage talks!

In one session, the audience was invited to  present themselves with just six words. This seems like an easy task, but turned out to be so difficult! Here are my six words: Curious Catalyst, Online Networker, Expert Generalist

I am a collector of quotes, here are some gems from the talks:

And see the great slide show and summary on the tED blog by Katerina Biliouri, the editor-in-chief of TEDxThessaloniki

My new TED friend Bruce Bassett describes the TED experience very well in his summary: “TED is insanely intense. It is a hyper-stimulated environment fueled by massive dopamine shots ingested from swimming in a sea of amazing ideas and people.”

Another interesting TEDster I met was Chander Chawla, he writes a great blog CDOQ: Chander’s Diaray of Observations and Questions, here are his notes: “Inside TED Global 2013”