Amazon started the recent ebook growth in late 2007 with the Kindle e-reader. And Apple put another big booster into ebooks in 2010 with the iPad. In February 2011 another milestone was passed, when ebooks became the biggest format of all kinds of books in the US.

But nothing is new under the sun, ebooks have been around for a long time, with different names and formats and readers. So why are ebooks taking off now?

I see many similarities between today’s disruptive book market and the multimedia business that I worked in during the 90s when my company Ahead Multimedia produced numerous interactive presentations and learning programs on CD-ROM. They had chapters, headlines, body text and illustrations, just like ebooks. we called it “interactive multimedia”. They looked like many of the ebooks you see now, but they also had more interactivity, animations and video than most ebooks have today.

Another similarity was the problems of competing and incompatible hardware and software platforms and varying screen sizes. My company thrived because we produced B2B communication for corporate clients so we could control the delivery platforms.

Here is the first ebook that I bought: 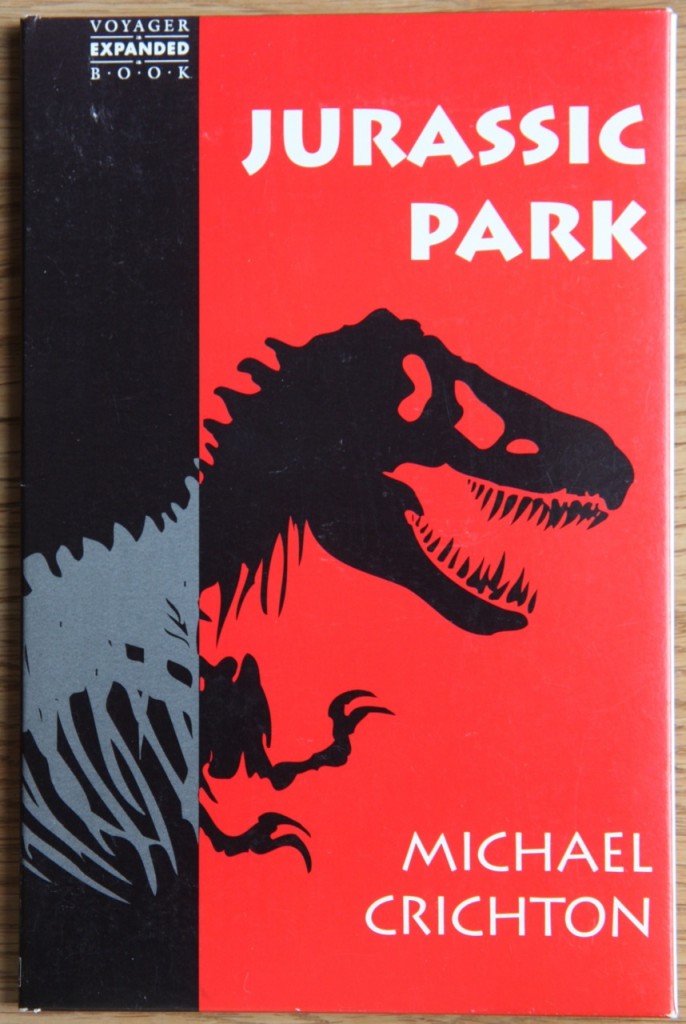 The novel Jurassic Park by Michael Crichton, an ebook on a 1,4 MB floppy disc, introduced in 1992!

This was the first title in the Expanded Books series produced by the famous Voyager Company, these ebooks were designed for the brand new Apple Powerbook computers. I attended the launch at the MacWorld expo in San Francisco in January 1992.

Note that they called it Expanded books, their pitch was that it offered extended functionality compared to printed books. “Electronic text is a dynamic medium that enables you to become a more active reader” 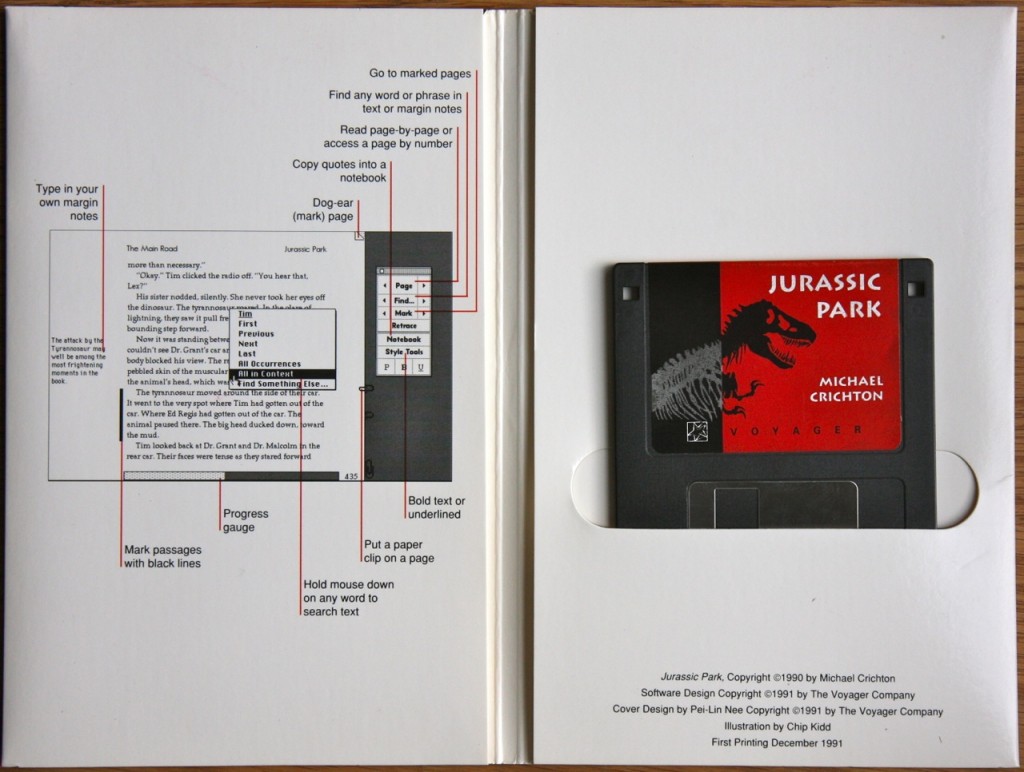 Notice the features such as being able to dog-ear a page or put a paper clip on it, and type in margin notes, search for any words in the book etc.

Notice also the absence of all communication tools, remember this was before internet and email so there was no social media or online communities to share your book experiences with!

Also note that they used real- life metaphors like adding a paper clip or dog ear a page, something that we still have not broken free from, compare with the wooden book shelves in Apple’s latest iBooks application: 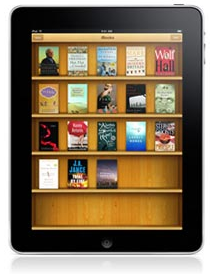 I think it is time to move to user interfaces that build on today’s digital possibilities and get rid of these old real-life metaphors! I am glad to see that others are also realizing this, such as Swedish startup Readmill in this post:
When we founded Readmill there were a few things we were fed up with. One was imitations of wooden bookshelves, the other that everyone was building closed ecosystems where no innovation could thrive. We decided to go the other way.

So why did those early ebooks fail?

But of course the main factors were:

2011 – the breakthrough year for ebooks

Right now it seems that in the US, the Kindle and Nook dedicated ebook readers are leading the pack, while the iPad is totally ruling among the more general-purpose tablet computers. Note that the Kindle ebooks can be read on Kindle ereaders as well as on PCs, Macs, iPads, iPhones, Android mobiles etc, according to Amazon’s vision “buy once, read anywhere”.

So the ebook took a long time coming, but it finally looks like the time is ripe now and the ebook market is booming, especially in the US and other English-speaking markets. The ebook market is growing everywhere, but in much varying degrees in different countries, here is a report from spring 2011 on the global market in 2010.

We now have computers and mobiles everywhere and wireless connections and much smarter development tools for ebooks than ever before. Most print book publishers are scrambling to get on the ebook bandwagon. It is clear that ebooks are growing everywhere, but there is still lots of confusion on how the market will develop, what kind of ebooks will succeed first etc.
But in my view the product itself is still in its infancy when it comes to exploiting all these opportunities and offering the reader a better experience.
.
Already in 1992 the main argument for ebooks was “extended functionality”, smart digital features that increase the reading experience. So where are all these new e-features?
More on that in my next post “Where is the e in ebooks?”
This is post #2 in my series on ebook market and development.
#1: Stories of spreading ebooks
#3 Where is the e in ebooks?
#4“Rethink the pricing of ebooks“

7 thoughts on “Early ebooks and why they failed”