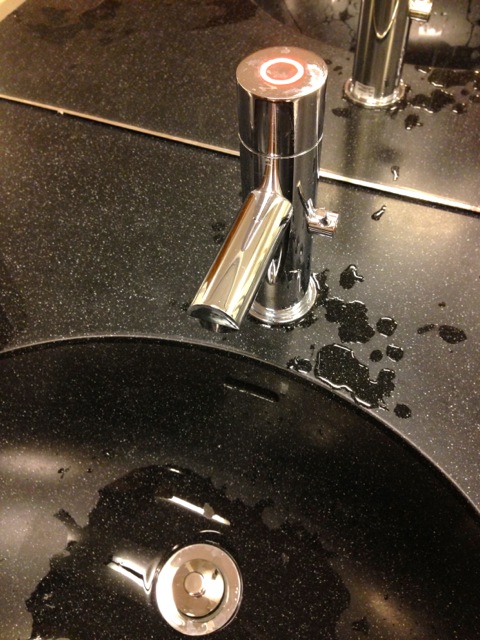 Google is in high-speed pursuit now of new functionality for YouTube.Â  Google has acquired one of my favourites: Omnisio, a US company offering a very smart and nicely designed video service. Omnisio allows you to share compilations of different videos in a simple way, but their most interesting service is a video player with embedded user comments, tagging and a very nice synchronized slide timeline.

See this example, a speech by Paul Graham, entrepreneur and founder of the US incubator Y Combinator, (who backed Omnisio):

I really like the divided video window with the slides to the left and the live video to the right, with the slide timeline at the bottom, it is intuitive that you can navigate by clicking in the time line. This is the best user interface I have seen for speeches!

The Omnisio founders say this about being integrated with YouTube/Google:
“We believe we’ve only scratched the surface in terms of what’s possible with online video, and we are really looking forward to taking the video viewing — and creating — experience to the next level.”

Indeed! As I have said before: we are only at the beginning of a marvellous online video development!

PS. Google and I seem to have the same nose for interesting internet-based applications 😉

As I have written before in my post Empowering internet video, automatic voice-to-text for online videos is already here. It means that any words spoken in a video is automatically transcribed into text.

The transcribed text can be shown in the video window or be used to search for the part of the video where something of particular interest is said. This is of course very powerful for videos from speeches and seminars etc, but there are many more possibilities such as automatic translation.

I have said for some time that this will become the 2008 killer application for online video.
So I’m notÂ  surprised that Google just started adopting it on YouTube. They start now in a moderate way with US presidential campaign videos: 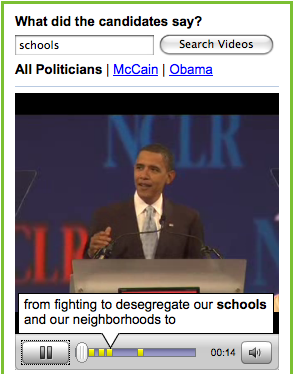 Try it: search the election videosÂ  here. Your search term is highlighted in yellow lines in the video timeline, point your mouse to the lines to see snippets of the transcript. See also an interview with Steve Grove, head of news and politics at YouTube.

I am convinced that Google and YouTube will go full ahead with voice-to-text services, for several reasons:

Video has many advantages but two major drawbacks:
1. It is hard to search video content. Most videos can only be searched by their titles or meta tags.

2. It is time consuming to watch. A 5 minute video takes 5 minutes to watch, but a text that takes 5 minutes to read normally can first be glanced through in 15 seconds to give you an idea of what it is about and let you decide to read it, all or not.

Voice-to-text solves both these problems effectively! Search engines can search for anything said in a video and it is easy to create video controls that lets the user jump directly to the interesting parts in the video, for example by clicking on a word in the text transcript or in a word cloud.

Exact information of the media content is a key factor for all kinds of monetization. Voice-to-text enables targeted video ads in a much more effective way. This is undoubtedly a key factor for Google’s interest in this technology. The obvious start is to integrate it with Google’s Adsense and include video commercials in search results. But it will be much easier for all the new online video sites to create valu-adding business models with this technology.

Another giant step for voice-to-text technology will be taken later this year when Adobe reportedly will integrate it into their Flash technology, thereby enabling it to a vast majority of all internet users.

So, 2008 will indeed be a breakthrough year for a more powerful and interactive online video!