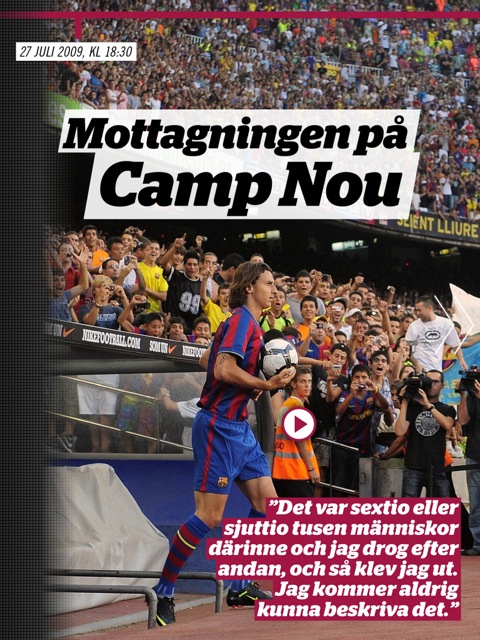 I confess: I have never been interested in football, never go to see games, don’t read sports news. But when the famous Swedish player Zlatan released his book I bought it since I felt that his life story was interesting. And indeed, I found his story captivating, especially his descriptions of all the drama on the field when he makes all these incredible goals.

Since I have never seen Zlatan play on TV either, I immediately missed seeing pictures in the book. And the next thought was of course “Why is there no ebook version of this with pictures and videos from the games?”.

So a few months later I was happy to learn that the Swedish publisher Bonniers has released an iPad version of the book, so I bought that one too. (The English version is called I am Zlatan)

This is the way for non-fiction ebooks!

Why? Here’s the hard-cover book, where Zlatan describes his reception when arriving in Barcelona: 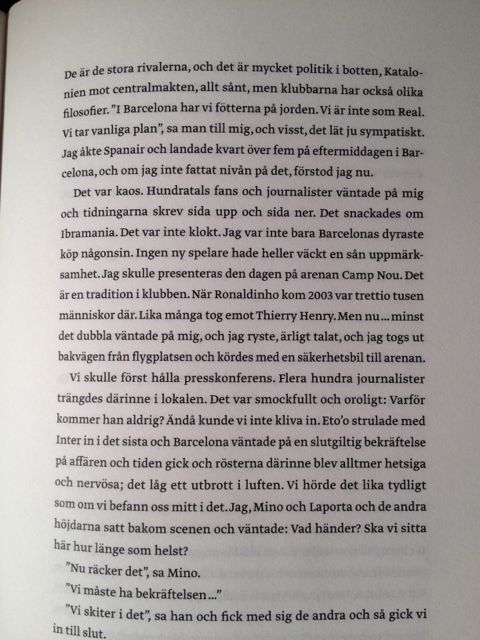 And here is the same part in the ebook version: 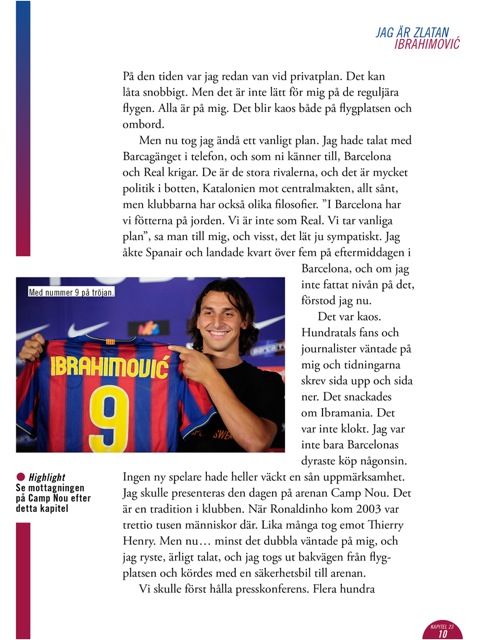 The image adds to the feeling, don’t you think?
And then there are more pictures and a video clip from the arena, where 60 000 people is cheering his arrival!

The ebook version lifts Zlatan’s story to a whole new dimension for me. I just feel that for non-fiction books, this is the way they should be. For pure fiction I am still quite satisfied with “just” text.

So I have now added attending a game with Zlatan to my “things I must do” list, since I want to experience the feeling that I get when enjoying this ebook.

But the economics are strange in the book business, the enhanced ebook version with all the pictures and videos is the cheapest:

The Swedish pricing for Zlatan book :

To me, the enhanced ebook version carries a lot more value, so I would gladly pay more for it.

So my message to publishers is:

The user reviews in the App store confirm this. Average rating so far for the Swedish version is 4,5 stars, with reviews like these:

“This is exactly how I want to read and enjoy a book. Great storytelling”
“Super cool re-imagination of the normal reading experience. Really shows the potential of the ipad as a reading tablet!”

2 thoughts on “The future of ebooks is spelled Zlatan”