I want to share some thoughts from my recent road trip in California, connecting with many smart people at interesting companies and organizations. California is indeed an important center of innovation and development, not just in IT and media, but also in high-tec and automotive industries, all of which interests me.

So here are some unsorted tidbits and impressions from a Swedish visitor in California. I lived in Los Angeles 1999-2000, during the peak of the internet hype, so I was of course curious to see what has changed over there in these 10 years.

We went to Los Angeles and from there flew to San Francisco, with lots of car driving around both these areas.

The first thing I noticed was that it is true what my friends in LA told me before the trip; that the traffic is much worse now than in 2000. I  did not believe them, since I thought it would be impossible, but they are right. To me it feels like the traffic situation in the vast LA area will soon reach breaking point, since the 4-6 lane highways are now crowded more or less 24/7.

We met with several experts in the automotive industry who all said that “electric is the new chic” in California, with massive projects and lots of political interest too to bring out electric and plug-in hybrid cars. They expressed concerns about the environmental total impact of that, for example how the electricity is produced. But we missed discussions about the bigger problem: if all the cars on the road are electric, the congestions will still be as bad!

I could not help noticing also that American cars are still not up to the European/Japanese standards We rented 3 similarly sized cars during our trips; two Chevys and one Toyota. The Toyota was by far the best of them, comfort, responsiveness, driveability etc. But I as impressed by the car rental agencies, enormous operations with reasonably prices and mostly very speedy customer handling, due to vast number of employees.

I noticed one big difference: there are now High-Definition TVs everywhere. This development is clearly much faster than in Sweden. I think the main reason is that we have the PAL TV system which offers quite good image quality from the start, but the US is evolving from their ancient NTSC system, to them the difference is much more dramatic. Most other aspects of TV such as numerous channels are now more similar in Sweden, due to cable and satellite etc. And we now also have obnoxious commercials every 10 minutes…

Being used to ubiquitous mobile telephone and mobile broadband in Sweden, it was a painful experience in California. I very often did not have coverage even in metropolitan areas and certainly not on the highways. I understand there are many causes of this, such as difficult to get building permits for cell towers, the vast geography and having several technical standards.

Both LA Times and USA Today have very tall, narrow paper format that is very hard to read on a breakfast table or an airplane, what’s the reason for this? And I still don’t understand why not all newspapers bind their pages together, like in Sweden.

I was glad to discover that California still has the very best burgers and much fresher produce and fruit than we do in Sweden. Such a lovely variety and quality!

But why on earth are the servings so enormous? If I order a regular main course, I get food that would be full dinner in Sweden for at least 3 persons! And even though California probably has the best vegetarian food in the world, most courses consist of ridiculous amounts of meat. Standard soft drinks are now around 60 cl, twice the size compared to what it used to be. What a waste and health problem. 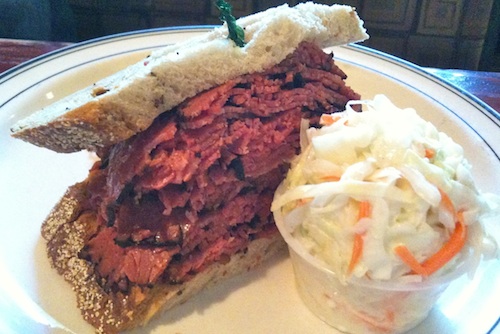 Half a pastrami sandwich for the lunch soup…