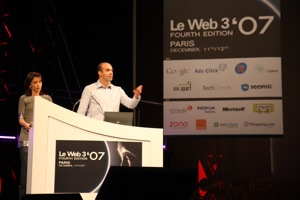 The LeWeb3 was one of the most professionally produced conferences I have attended in several ways.
The video projection was the best I have ever seen and the audio quality was top notch with very engaging musical intros.
I also liked the schedule with lots of time for networking in the coffe and lunch breaks. The lunch offering was a totally staggering buffet of french gourmet cuisine at it best. A two hour lunch break with hundreds of small dishes makes it easy to relax and network!

Loic LeMeur and his wife Geraldine, organizers of LeWeb3

Most of the speakers were very inspiring and I liked the mix of key notes and panel discussions. But the conference format was still 1.0, (OK, more like 1.4) it is now time at least for internet conferences to live like they preach and move to 2.0! (See my separate blog about this.)

Some of my notes from LeWeb3: 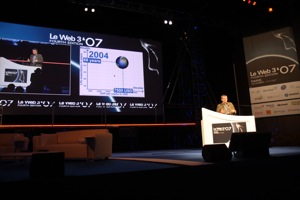 Hans Rosling
his presentations at TED have made him world famous, don’t miss them!
“Storytelling works! There are 10 000 watchers for every clicker”
“Just putting facts on the internet does not work, storytelling does!”

Panel: The Internet’s impact on design
This was a somewhat confused panel discussion, as it consisted of very different types of peope that did not know anything about each other.
Rafi Haladjan, the creator of the smart online rabbit Nabaztag (rabbit in Armenian). This rabbit is much more interesting than it looks, since it is a good example of an important trend: EVERYTHING will be internet-connected, not just computers and mobiles. The moderator missed this trend and Rafi should have demoed the rabbit. (I have just ordered one to get the feeling)

Panel: Monetization in the Web 2.0 world
A trio of entrereneurs presented their models, it showed just how difficult it is to come up with ways to earn real revenue.
A successful blogger mentioned that he made $25 last month from Adsense ads on his blog…
Another entrepreneur reported having bought a Facebook ad campaign with 1 million impressions that generated just 3 (three) clicks.
My conclusion: Nobody knows what will be the keys to monetization, but ads as the only revenue model is not working now and probably not in the future either, as the competition for ad dollars increase tremendously.

Another investor gave the tip: “Don’t invest in companies selling to big companies, since big companies never buy anything! They have like 18 month selling cycles…”

Why Enterprise 2.0… isn’t
JP Rangaswami from British Telecom Design was very inspiring:
” I don’t worry about Google’s policy of letting their employees use 20% of their time for their own projects.
I worry about the other 80%! Why do they still have the punch-clock thinking?
At my office, we focus on the output rather than the input!. What do I care when or where my people are doing their work?”

Evolving entrepreneurship
Martin Varsavsky came on stage with the message that there are indeed investement opportunities also in Europe, and that our 22 languages can be turned into something good. He also mentioned that 17% of Googles total revenue comes from the UK market alone!
His blog is a must fo everyone interested in internet-related entreprenership and international business.

The Future of TV
This is my own favourite topic, excellently moderated by Jeff Pulver, http://pulver.com/ a very energetic and typical American (Hawaii shirt and all)
“TV got the idea of Web 2.0 first and they have corrupted it! Using audience phone-ins and user-generated content such as American Idol…”
Also in the panel was the experienced blogger Robert Scoble, his videoblog at http://www.podtech.net/scobleshow/

Other interesting video services that were mentioned:
Asterpix, a new, highly interesting video site reviving the old concept of “Hypervideo”, (interactive video). There are clickable areas in the video that lead to notes and links. You can also see annotations in a list and use them to navigate inside a video clip. Very smart!
http://www.blogtv.com/
http://www.kyte.tv/
http://dotsub.com/ 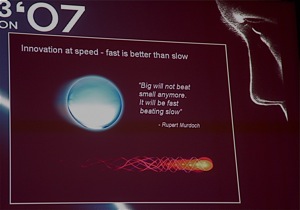 Janus Friis
(co-founder of Kazaa, Skype and Joost) made one his his rare appearances. Being an unusually shy Dane, he gave an inspiring, laid back and personal tale of the serendipity of his entreprenurship, from Kazaa to Skype to Skype. He and Niclas have disrupted the music industrcy and the telephony industry and they are now re-inventing television, not a bad feat! See also his blog

Also interesting is the fact that they have invented nothing new, they “just” saw that nobody was using the existing technologies to make really simple solutions and then market them. When Skype was launched, it had been possible for years to talk via MSN chat, but Microsoft had not realized that this possibility could be used to replace telephony.
But Joost is a more complex service, since it depends on offering good content and therefore deals with hundreds of programme rights holders around the world. But the biggest obstacle to overcome before Joost is a Skype-like success will probably be to make people more active in their viewing habits. Coach-potatoes are more common today than the stats show, even among the young!

Also, there is a link missing that can enable us to watch Joost on our big-screen TV in company of our friends and relatives. I see two ways for this:
1. come up with a simple Joost set-top box that connects to the TV (or have Apple integrate Joost in a smarter Apple TV model)
2. Integrate Joost into the digital cable TV offering from the triple-play operators.

The only mishap at LeWeb3 was the strange ending. The last two sesssions was somewhat disconnected from the conference topic and the speakers suddenly found themselves alone on the stage. One of the speakers that I wanted to hear, (David Weinberger) was inexplicably dropped from appearing on stage. All this caused the energy in the room to drop at the end and people left the conference with a feeling of anti-climax.
A grande finale session with uplifting foresights into the future was sorely missed!